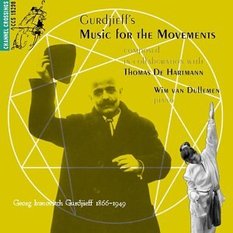 Aside from the music for The Movements, Gurdjieff also jointly composed a number of “original” piano pieces with Thomas De Hartmann. Some were songs or tunes that he had encountered at earlier times in his life. Some may simply be original compositions. His method of composition was to give De Hartmann the tune and let De Hartmann translate it for the piano. Gurdjieff also played the guitar and harmonium. There are recordings of his harmonium music that date back to his later years.

You can find recordings on Amazon, Gurdjieff Books and Music and other web sites.