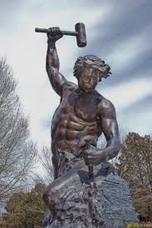 WORK ON ONESELF  by R Bloor

The Work is a spiritual pursuit, that differs from other serious spiritual pursuits because many of the activities of The Work take place in life, carried out by the individual who is “in The Work.” The individual works on himself or herself in the normal course of their lives. They do what they might otherwise do if they were not in The Work, traveling to work, doing their job, socializing with friends, going to the movies or the theater, looking after their family and so on.

The Work is very specific in not requiring any belief whatsoever. As almost a direct counterpoint to belief, someone who is in The Work is expected to take no information on trust. Data that you did not gather yourself is just hearsay, even if it comes from someone who has proved themselves to be reliable. Instead you are expected to meet any idea or theory that might emerge, for example, from a book about the Work, with a healthy skepticism. The appropriate attitude would be simply “that it may be true and it may not.”

If a Work idea or theory is important to you, then you should make the necessary effort to demonstrate whether it is true or false. If you can think of no way to do that, then you will have to put it to one side for the moment.

Ideas of the Work

A good deal of The Work is psychological in nature. Those who follow it investigate the psychological theories of The Work by a process of gradual self-observation attempting to determine whether they are true and what they mean in practice. There are many strands to this. As a consequence, it cannot be simply summed up in a phrase or two. Indeed there have been many books written about different aspects of it. Nevertheless, there are some fundamental ideas which we can touch on briefly here (click on the links if you care to read more):

Sleep/states of attention
Three brains or controlling functions in man

It is worth emphasizing that The Work is not a self-help movement in the modern sense of that term. It is distinctly about spirituality and hence it is best to think of it as similar to other spiritual movements – esoteric Christianity, Sufism, esoteric Judaism, Tibetan Buddhism, etc.)

The Work does not try to impose any particular morality on other people, as for example, some religions do on their followers. It has followers, of course. They comprise of individuals who have chosen to work on themselves. Such individuals are not obliged to follow any moral rules per se.

However, Five Obligolnian Strivings are described in The Tales. These constitute specific efforts that someone who is in The Work is advised to make. The penalty for not making such strivings is simply that you are unlikely to receive the benefits that they may bring in time. Some of these strivings require particular inner attitudes and could not be followed in their absence.

For any individual The Work must necessarily begin by encountering the ideas of The Work. This most likely will occur by reading a book about The Work or through meeting someone who has encountered The Work and may even be in The Work.

Either way, it is unlikely that this first encounter will do anything other than provoke some interest. There is, in fact, a likely set of steps that will be followed by an individual that encounters The Work.

They will:
Attempt to comprehend the ideas they have encountered.

They may simply think of these ideas as not so different to other ideas they have run into and move on. Or they may find them interesting in a theoretical way and may even play with them in their mind. Also they will eventually become bored and move on. Only if they recognize something that is, for them, true in those ideas are they likely to continue.

Apply The Ideas To Themselves.

The Work includes many psychological ideas which are practical and testable. So someone who reads and comprehends some of the ideas will usually try to apply them, to try to test the truth of them in some way. If they achieve some results in doing so, they are likely to go back to step 1 to gather more of the ideas of The Work in order to establish a deeper comprehension of what this body of ideas is. Thus they may repeat steps 1. and 2. several times.

It may occur to many people – indeed it is quite natural that this would be the case – that they¬†could¬†do this work alone. After all it involves a few things that may seem quite possible: remembering yourself, observing yourself, not expressing negative emotions and so on. However, The Work also makes some challenging statements: man cannot do, man has no will, man is asleep. as an individual repeatedly struggles with these ideas and with these practices they start to realize that, in fact, they cannot do this work alone. In time they will realize that if they continue on their own they will still be achieving very little many decades hence. So naturally, they will seek to connect with others who can, possibly help them. They will attempt to find a Work group.

There are some¬†exercises – they can be thought of, very roughly, as forms of meditation – which those who are working on themselves often try to carry out on a daily basis. You can read about them in some Work books. In brief, they are:

For a period of time early in the morning, the individual sits in a relaxed manner and senses themselves.

This involves reviewing the day from beginning to end. It is done at the end of the day when all activities of the day have been completed. Specific instructions on how to do these exercises are usually communicated from person to person, rather than being learned by reading from a book.