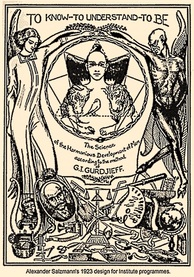 ABOUT THE WORK  by R Bloor

In the early years of the 20th century George Gurdjieff appeared in Russia and began teaching a set of ideas – many of them apparently new – to groups of pupils in Moscow and St Petersburg. He later introduced this teaching to most of the countries of Europe and also to America. Gurdjieff’s method of teaching, aside from his individual interactions with his many pupils, involved: physical work on practical activities, dances (called the movements), music, specific exercises and readings.

Taken together, this set of activities, along with the study of Gurdjieff’s writings, today comprise what is called “The Work.” The Work originated from this one man, which is why it is often called The Gurdjieff Work. It is not known for sure whether he was tasked to introduce The Work by some “master” of whom he was pupil, or whether he simply chose to do so on his own. He hinted that he had gathered his knowledge from multiple sources, but never provided any definitive detail.

The Work embodies such a wide variety of strands that it is difficult to imagine that it all came from one man, and yet Gurdjieff initiated it alone. He had assistance in doing so. He composed piano music in collaboration with Thomas De Hartmann. He taught some movements that he said were temple dances from the East and choreographed many others entirely on his own. His writings were his own, although editing work and translations were carried out under his direction by quite a few of his senior pupils.

Strands of the Work

Gurdjieff taught that there are three lines of work.
The “Three Lines of Work” are fundamental to becoming involved in The Work. They are:

Individuals, who are attracted to The Work do not begin to work on all these three “lines” at once. In practice, there is a natural order to the commencement of these lines of work.

Gurdjieff died in 1949. So much time has passed since then that very few individuals who were directly taught by Gurdjieff are still alive. Consequently those people who lead Gurdjieff Groups depend to some degree upon his legacy: